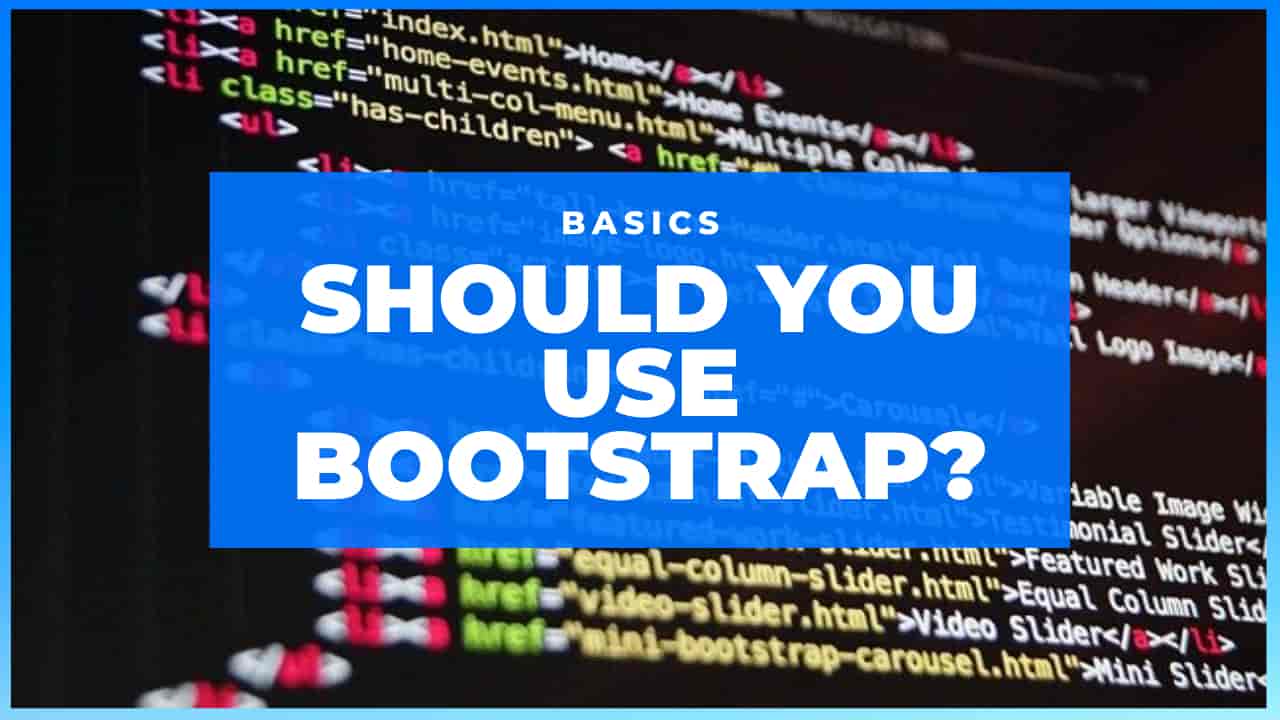 Should you be using bootstrap?

It has just a bunch of features in it to make working with styling things so easy and you don’t really need to know CSS in order to use these frameworks. It actually depends on quite a few things and the first thing that you should ask yourself is what your project is for? Is this a project that’s for a really cool front-end design that you’re working on or maybe you’re just doing a simple front-end to go along with a really complex back-end that does a lot of cool things compiling data or maybe you’re working for a project for a client that needs to have a really cool front-end.

These different questions are going to determine whether or not you use bootstrap or not in the first example I said if you’re making a really cool unique front-end with a lot of cool UI and UX designs bootstrap is a terrible idea.

You’re gonna spend more time working against bootstrap trying to make it look like you wanted to rather than actually using it for the things that help you with but like I said in my second example if you’re just making a really simple front-end site with a really complex and you don’t care so much about how the front end looks you.

Just want it to look good enough and function then bootstrap is great for you because you don’t have to spend a bunch of time working with CSS and styling. You just throw in some classes and it just works and you’re not gonna really tweak the styling too much.

So you don’t have to worry about messing with bootstrap and trying to make it look like you want because you’re just gonna use the bootstrap styles and it’s going to work how you want it to. Another thing you need to consider is the timeline of your project.

If you’re working for a client or a company lots of times you’re gonna have a deadline set on you when your project needs to be finished and if it’s a short deadline and the UI doesn’t matter too much. It just has to be good enough then bootstrap is probably a great option for you because it’s gonna save you tons of time by just throwing bootstrap into your project putting in the classes.

That bootstrap gives you and just having a functional UI because without that you have to manually create all of your own styles and while you’ll probably get a better-looking result in the end it’s time-consuming and it’s not as easy as just throwing in the classes.

So if you have a very short time frame or you’re constantly changing your product. So your product goes through lots of iterations and it’s constantly changing using bootstrap is great for getting up and running with those changes but if you have a longer timeframe or your project doesn’t change as much maybe you’re not in a startup situation then doing your own CSS is gonna be great because it gives you more control and it’s going to look better in the end.

If you want to learn CSS don’t use bootstrap. It’s going to make it hard to learn CSS because you have to learn bootstrap CSS which is so much different than just normal CSS and it makes you do.

But something many people forget about is what parts of the framework you’re going to be using.

For example, if you’re just using bootstrap for the grid system the rows and columns you’d be much better off just using flexbox and CSS grid to make your own custom styles. It’s going to be easier than using bootstrap because you can make it exactly as you want it to and it’s not going to bring all the bloat of bootstrap.

If you’re only using bootstrap for the buttons maybe or the colors or maybe even the table these are things that are not that hard to make on their own. So if you only need a few parts of bootstrap such as these buttons and grid or the buttons table and grid you’d be better off just spending a couple of hours making your own system. Unique to your specific use case.

Whether you want to use bootstrap or not is going to be the JavaScript portion of bootstrap now. Many of you may not realize but should-you-use-bootstrap has a lot of JavaScript components they have accordions collapsed toggle as they have pop-ups dropdowns all of these different things.

Use JavaScript and behind the scenes they’re using jQuery and now you may love or hate jQuery. It doesn’t really matter but in the end, jquery’s a fairly large library to download and install inside of your application.

If you’re doing something with like react for example ora front-end framework jquery and react don’t play very nicely together. It’s a real pain to use them together. So having to support bootstrap and react at the same time is just not fun in my opinion and I’d recommend not going with bootstrap if you’re going to be doing heavy front-end work or utilizing these JavaScript components of bootstrap with a framework like react now.

If your application is fairly light on front-end JavaScript then having these extra components is great because you don’t have to do the work to make these dropdowns or collapse menus issues built-in there for you and it works.

In the end, it really depends on you whether you want to use bootstrap or not. If you’re in the learning phase then I will recommend you go through CSS classes and use it in your modules. Thank you very much for reading this article. If you have any questions about bootstrap classes, please comment below. I’ll be happy to reply you ASAP.

What is WordPress? And How Does It Work?

How The Tech Economy Is Changing?